UMIDIGI F1 Play, which is a gradual upgrade of the F1 model, which gained widespread popularity, became the company's second phone with a rear camera on 48 MP after UMIDIGI S3 Pro . Today, a new device comes in global sale for just $ 199,99 through Aliexpress, and its main competitor is similar to Xiaomi's Redmi Note 7. Which one is better? Let's check a little comparison below. 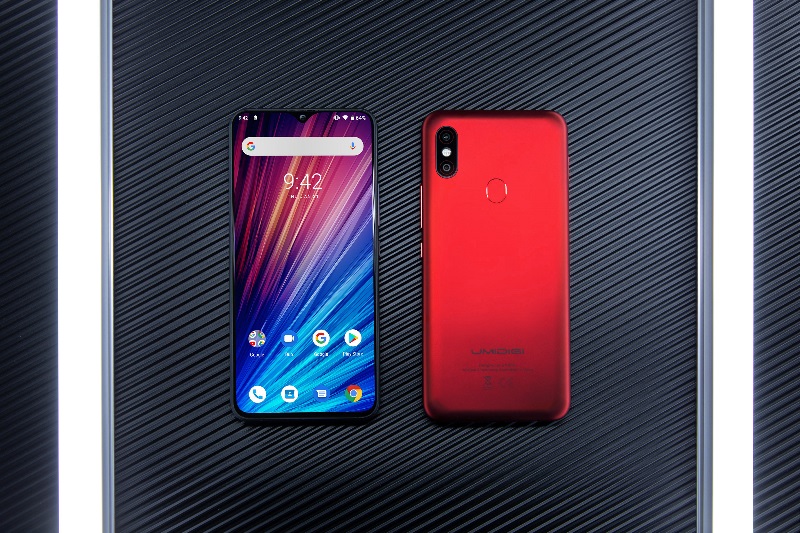 UMIDIGI F1 Play and Redmi Note 7 have the same notch shape. UMIDIGI calls it a “drop of water,” while Xiaomi calls it a “drop of drops.” Both have a 6,3 ″ FHD + display, but judging by the photos, the faceplates on F1 Play seem thinner. This leads to a higher screen / chassis ratio.

As usual, UMIDIGI went with the MediaTek SoC, as it equips the F1 Play with the Helio P60 AI SoC, while its opponent comes with Snapdragon 660. Both SoCs reach approximately 140 000 points on Antutu, so their performance is very close, and both can do well with heavy games. The big difference is in the combination of memory, since F1 Play comes with 6 GB / 64 GB, while Note 7 comes with 3 GB / 32 GB for about the same price. In addition, F1 Play comes with a battery on the 5150 mAh, while Note 7 remains with the battery on the 4000 mAh. Both phones support fast charging of the 18 W using UMIDIGI, which provides a quick charger out of the box, and the Note 7 comes with a simple 10 Watt charger. 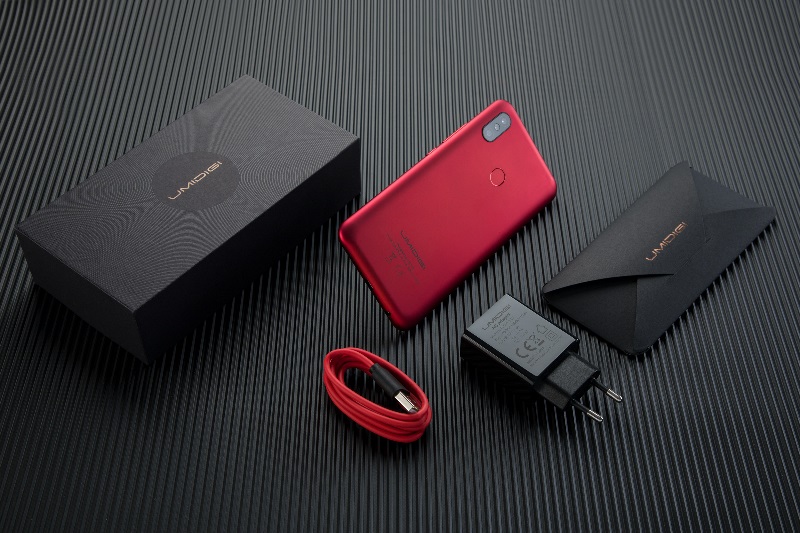 Photo and video on both sides are provided by a dual rear-view camera with an 48-megapixel camera with an 1 / 2 ″ image sensor and 1,6 micron super-pixels (by combining pixels, which combine four pixels by 0,8 micron into one in low light), On the other hand, the F1 Play is equipped with a 8-megapixel secondary sensor, and the Note 7 - with a 5-megapixel. In addition, the front camera on the UMIDIGI device has an 16-megapixel camera, while the Xiaomi offer has a smaller 13-megapixel camera.

Speaking of software, UMIDIGI continues to support its decision to adhere to the standard Android, as it comes with Android 9 Pie ad-free. At the same time, Redmi Note 7 runs on a highly modified Android MIUI 10 Android Pie. Both phones are equipped with a 3,5-mm headphone jack, but UMIDIGI advertises NFC with Google Pay support, which is lacking in Note 7. Moreover, F1 Play supports global network ranges, and Redmi Note 7 is available in different versions depending on where you live. 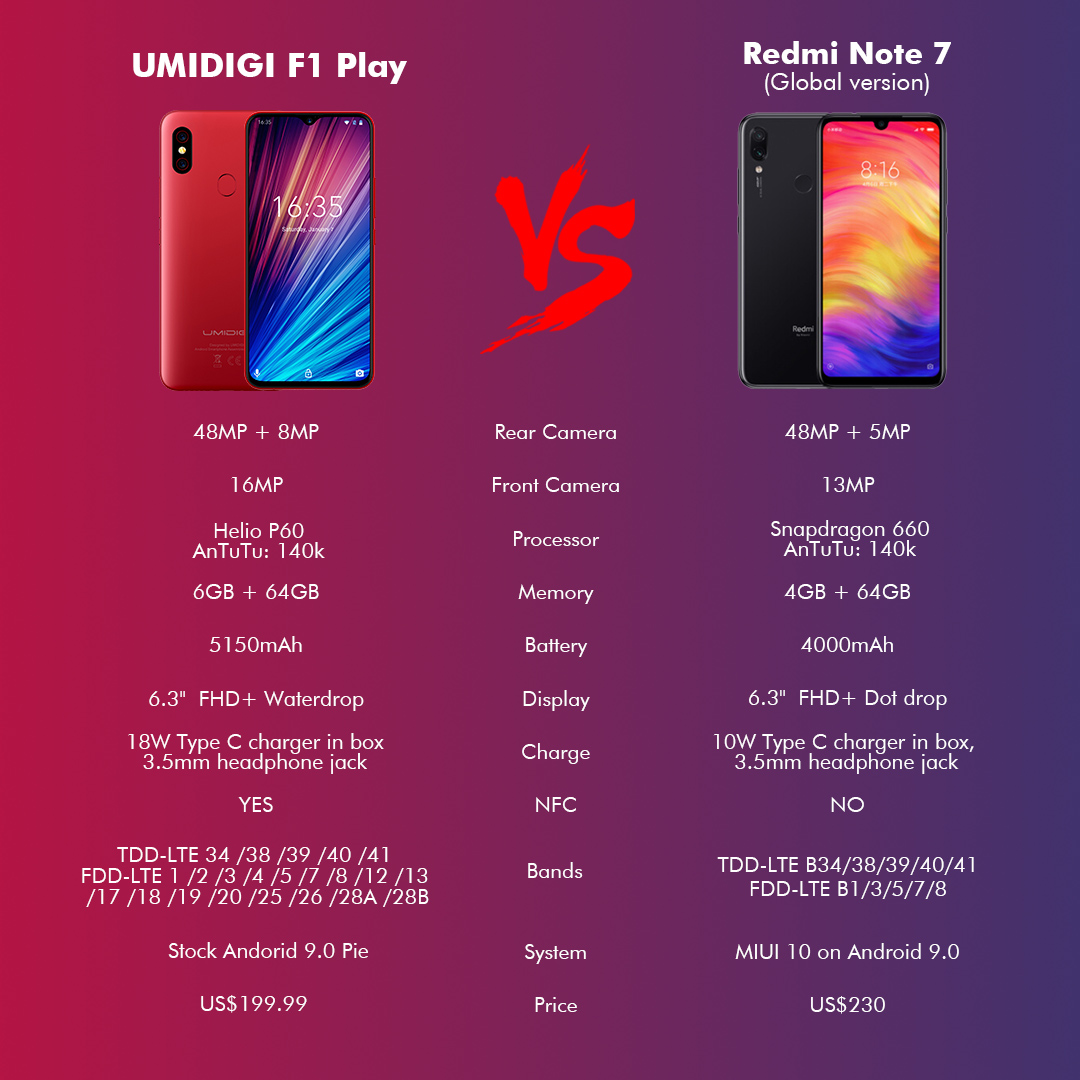 As we mentioned earlier, UMIDIGI F1 Play starts selling 199,99 dollars globally on AliExpress. It offers a slightly better set of specifications, but the price is lower than the Redmi Note 7. F1 Play comes with 6 GB of RAM and 64 GB of internal memory, and Note 7 offers half as much for the same amount. If you decide to choose the 7 version of Note for 4 GB / 64 GB, you have to spend about 230 dollars. 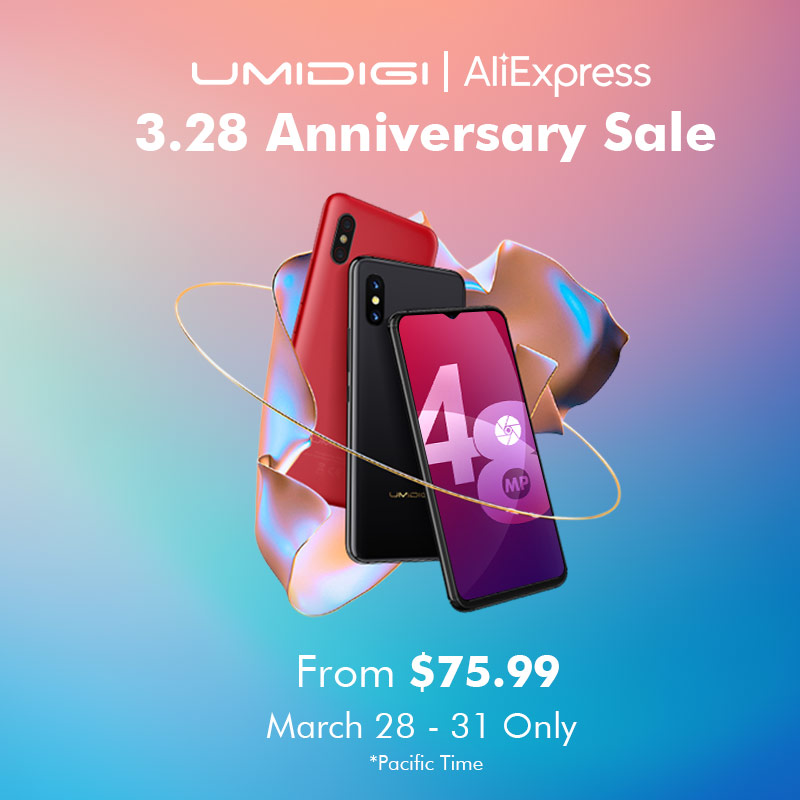 In addition to the official pre-sale period of F1 Play, a Chinese manufacturer participates in the Aliexpress 9th Anniversary event from 28 to March 31. There you can find S3 Pro for 275,99 dollars, UMIDIGI F1 for 179,99 dollars, One Pro for 139,99 dollars and A3 Pro for only 79,99 dollars. You can check all their offers on their activity page . 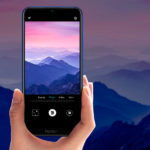 The best-selling smartphone in Russia in 2020 today